According to The 2017 Self Storage Demand Study, roughly 1 in 10 households rent a self storage unit.  This study shows that the demand for storage units isn’t decreasing and that nearly 14% of renters are millennials (anyone born between 1981 and 1996). This data proves that there is value in using a storage unit and A-Side Self-Storage Units provide storage units in Springville Utah at affordable rates.

Storage units are a popular and temporary solution to a number of problems such as moving, remodeling or just not enough space to store items you don’t want to throw out.  Without the option to rent a storage unit, most people would be forced to unload the items on family or just simply discard them which isn’t ideal. While self storage can hold just about anything you own, there are restrictions on what you can or should store in them.

Why Are There Self Storage Item Restrictions?

Just because someone has rented a storage unit doesn’t mean they are free to store anything they want in it. Safety is important when storing items and not everything is safe or even legal to store in public storage. Before you can even start using our storage facility, you have to sign an agreement to follow our storage policies that keep you and everyone else who uses our units safe.

What Items Are NOT Allowed in a Storage Unit?

Most of the items that can’t be put into self-storage should be common sense but there are a few that are a little more ambiguous or surprising. There are obviously safety and legal reasons many of the items on this list aren’t permitted which will be listed along with the item.

This should just be obvious to most people but living animals can’t survive in an enclosed storage unit.  Not only is it harmful to an animal to leave them in a self-storage unit, but it’s highly illegal. Rented storage units are meant for non-living items. These aren’t temporary living situations for anything that’s living. If you are moving and can’t keep your pet with you, you’re better off leaving them with family than subjecting them to the dangers of being locked in a storage unit.

Trying to store firearms or flammable items (gun powder, explosives, live ammo, etc) can be very dangerous and puts other tenants and the storage facility at risk if they malfunction or catch fire. It doesn’t take long for a small fire to spread to other units causing thousands of dollars in damages. It’s better to just dispose of any flammable items like batteries, fireworks and aerosol cans rather than take the risk of them catching fire.

As for firearms, it’s just not something you want to store in a storage unit even if it was allowed. It’s better to find legal and secure storage for your firearms if they aren’t going to be in your possession for any length of time. It’s just not worth the risk of getting them stolen from a self-storage unit that isn’t designed for storing them.

Another common sense item but has been found multiple times in storage units. Drugs are illegal to own at any time and storing them in your self-storage unit isn’t allowed. If the facility owner or manager suspects you might be holding illegal substances in your unit, they won’t hesitate to inform the local police to investigate. If you are holding drugs or stolen items in your storage unit, you may be arrested. It’s just not worth the risk. If you must use one of our Springville self-storage units, make sure everything you put in the unit is legal and owned by you.

Food and other Perishables

This one can easily be overlooked and forgotten but our storage units aren’t designed to keep food fresh when they are left in them. Food will spoil and rot leaving behind odors that can spread to other units. Not only that, but food attracts rodents and ants that are difficult to get rid of. Rodents can damage your items and the belongings of our other tenants and while we work hard to make sure the storage facility is free from rodents, leaving food behind will, without a doubt, attract them regardless of our efforts.

It goes without saying but we’ll say it here: Don’t Store Expensive or Priceless Items. Our self-storage units are secure and safe but there’s always risk to valuable or priceless items when storing them. Anything with a value of $5,000 or more requires a special written permission to keep in our storage units. If you have any questions about an item you want to store, be sure to reach out to us. 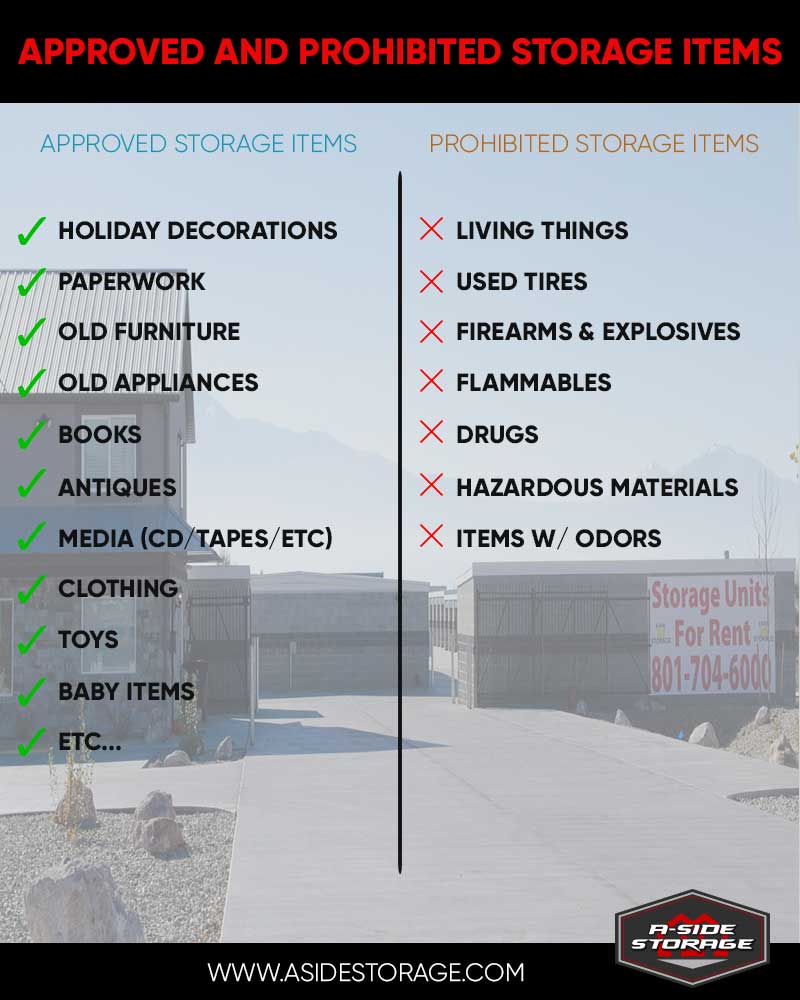 Moving or De-cluttering Your Home

5 Helpful Tips: Organize Your Self Storage Like A PRO & Stack ‘Em Right!

Tips To Get You Moving Into Your Storage Space!